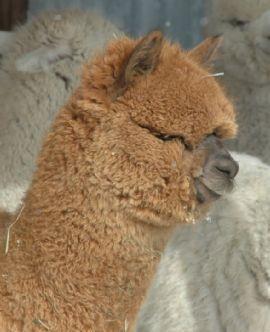 Dam: Makella
| 31502559 | Dark Fawn |
1/8 Chilean, 7/8 Peruvian - Makella has it all - gorgeous fleece with uniformity, soft handle, fineness, tight crimp, and density, along with beautiful conformation, a perfect bite, and ribbon-winning presence. Makella has won 4 blue ribbons in 3 different show types - shorn halter, halter, and fleece - proving that she is a complete package. With her 3.5-year-old fleece she won a blue ribbon and RESERVE COLOR CHAMPION in the Northwest Alpaca Showcase 2007! The following year she won 2nd at Nationals with her 4.5-year-old fleece, beating some very well-known farms. The fact that Makella maintains ROYAL fineness and UNIFORMITY as she ages is exactly what we are breeding for.

Makella has superior genetics in her background (Peruvian Accolade, Peruvian Augusto, Peruvian El Moustachio) and passes them on to her crias in prime form. She has now given us 3 lovely brown girls with incredibly soft handling fleece & fantastic conformation. 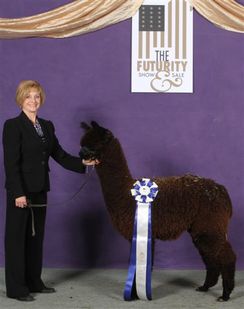 Daytona's cria have proven just how capable Daytona is at producing black with such a variety of dam colors. We are thrilled with his offspring. They are dense, silky, crimpy, extremely well put together conformationally, and have such lovely presence. In 2016, Daytona produced 5 black, 1 dark grey, and 1 brown cria. Dams ranged in color from black to beige, but most were fawn and brown. Daytona exceeded our expectations. Histograms are showing that Daytona offspring are following in his f ...
More Details
$800.00
Ask a question
Details
Histogram

Avanti's 2012 cria, a male out of the genetically revered Snwomass XXXtreme Flare, is Flare's Incan Nightfire (FIN). He is a unique and gorgeous dark taupe color with a fleece champion ribbon & halter blue ribbon. Check out his fineness on his webpage - amazing for a grey! He is proven and available for outside breedings.

In 2016, Avanti produced another FIN, only female this time and out of the black multi-champion Crescent Moon's Daytona. Her name is AHarmony's Mandala and she is stunning! She produced her first daughter in 2019 - a really beautifully fleeced fawn named River.

Avanti's fleece is fantastic, uniform all the way down to her belly with crimp, fineness, density, color. Her dam is very consistently producing exceptional offspring. In fact, both Avanti's dam and sire are CHAMPIONS! Makella, her dam, won Reserve Champion for her fleece at Showcase in 2007. And in 2008 she got 2nd at Nationals (fleece) at 4 years old. She also has first place ribbons for halter from big shows such as GWAS. Avanti's sire, Hudson Hawk, is a gorgeous and successful black stud producing fineness and passing on his fantastic crimp. He won many championships during his show years and is maintaining his fineness and other desirable fleece characteristics.

In 2008 we wrote, "She is going to produce an elite fleece come shearing next year" and boy did she! Her fleece won fawn COLOR CHAMPION at the Level 4 AFCNA Continental Fleece Show. Judge Wade Gease wrote, "Beautiful Appeal - Bright & Stylish to tip!" Then in May 2010 she got 1st place at Nationals! Both Avanti's dam and sire have maintained extremely fine fleeces well into adulthood (Makella's is 21 at almost 6 years old, Hudson Hawk's is 22 at 5 years old), giving Avanti a good chance of producing a highly usable elite fleece throughout her life. If that's not enough, Avanti produces an abundance of milk and is a wonderful mother. We couldn't ask for anything more.

Flexible financing available on most purchases. 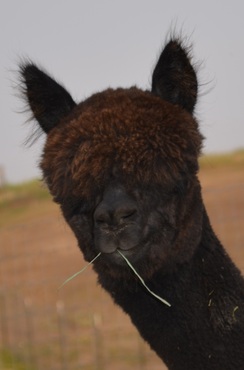 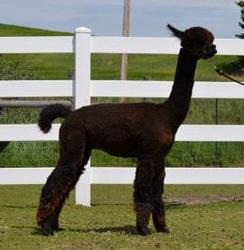 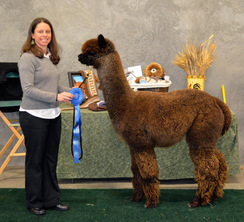 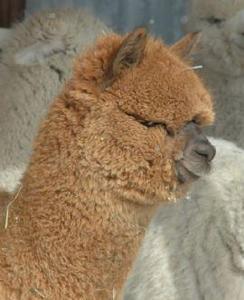 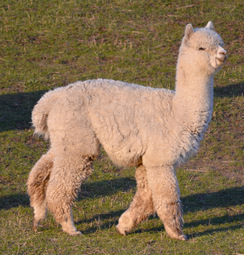